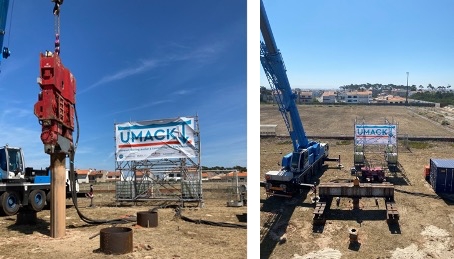 This recent field trial build upon previous successful stages of the anchor test programme at the world-class scaled anchor centrifuge testing facility at University of Dundee (UoD), and on-land testing at the world-renowned Fraunhofer Institute for Wind Energy System (IWES) in cooperation with the Test Centre for Support Structures (TTH) of the Leibniz University of Hannover. Cross validated results coming from the multi-location and scale test programme indicate several leaps in performance including:

“We are pleased to report the Portuguese field trails have been concluded successfully providing the green light for full-scale manufacture and ocean demo,” said UMACK Project Manager Matt Dickson. “The tests were designed to ensure the anchor could be installed and decommissioned in sandy conditions, on land, as close to the deployment site as possible. The test programme has allowed us to verify the anchor’s holding capacity in as close to ‘real-life’ conditions as possible before ocean deployment of the full-scale anchor not far from this field trial site. Importantly we have also been able to successfully align and back up the results previously observed at UoD and IWES and prove that the Vibrohammer install methodology is working successfully. The UMACK technology is being developed as a universal solution for a broad range of marine energy applications and seabed types. We believe it has the capacity to transform the mooring and anchoring process across the marine energy space addressing key issues of affordability, durability and reliability.”

“The initial anchor lay is pivotal, providing a solid foundation for our wave energy converter to operate in extreme Atlantic conditions,” said Miguel. “The UMACK system provides us with a series of unique benefits, including quick-connection and full-surface operation, removing the need for dive support. This not only streamlines marine operations for the installation process but also the retrieval of our WECs for maintenance, helping maximising operational windows.”

UMACK is funded by Scottish Enterprise and the Swedish Energy Agency with co-funding from the OCEANERA-NET COFUND (via the European Commission under Horizon 2020).

For more information on the UMACK Project visit the website www.umack.eu or contact Matt Dickson on. matt.dickson@corpowerocean.com or Catriona Macdonald on catriona.macdonald@ternan-energy.com

The UMACK Project (Universal Mooring, Anchor & Connectivity Kit) is aiming to develop a new, ground-breaking mooring solution for marine energy systems. The innovative technology is being developed as a universal and easily transferrable solution – presenting a significant breakthrough for the ocean energy space addressing key issues around affordability, durability and reliability. The initiative is being led by a global consortium including geotechnical specialist Ternan Energy, wave and tidal energy developers CorPower Ocean and Sustainable Marine, mooring experts TTI Marine Renewables, EMEC (European Marine Energy Centre) and marine renewable energy modelling experts from the University of Edinburgh. It is being financed by Scottish Enterprise and the Swedish Energy Agency with co-funding from the OCEANERA-NET COFUND (via the European Commission under Horizon 2020).