What does it take to build the world’s largest wave energy test-rig? 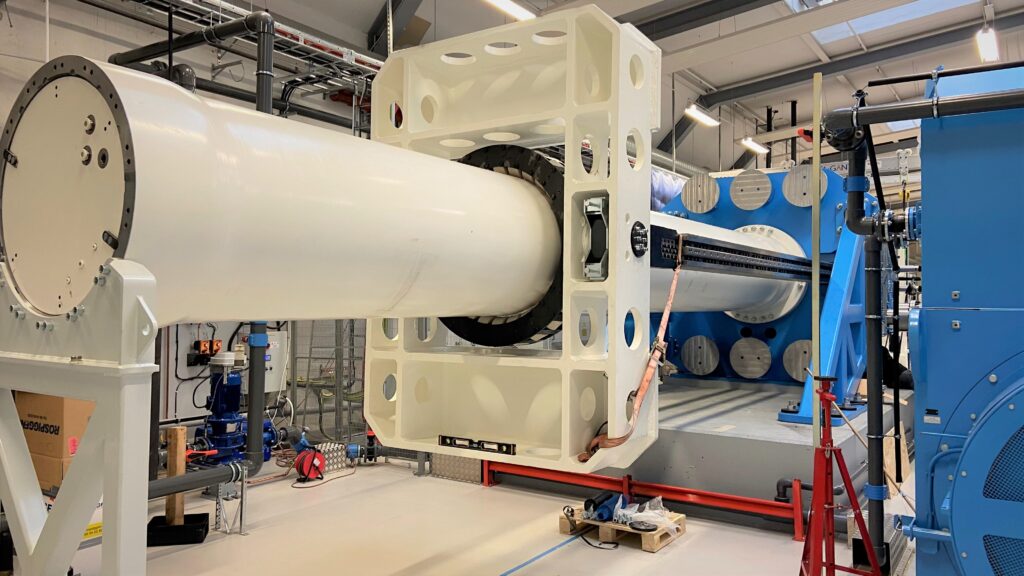 While bringing its groundbreaking Wave Energy Converter (WEC) technology into commercial scale systems over the last three years, CorPower has also developed an on-land test-rig capable of accurately simulating wave loading from any ocean site around the world.

The ocean is a fierce and unforgiving environment. All too often we have witnessed pioneers deploying solutions at sea before being thoroughly tested on land, only to go on and fail. Many risks involved in deploying first-of-a-kind systems can be eliminated if machines are rigorously tested and debugged in a controlled machine hall environment before ocean deployment.

CorPower’s first commercial scale WEC called C4 has a diameter of 9 meters, power rating of 300kW and a moving mass of around 30 tonnes. The power per mass ratio of C4 represents a step-change improvement to the structural efficiency of wave energy, allowing a large amount of electricity to be delivered with a lightweight, low-cost device.

However, even with lightweight devices large amounts of water moving with the buoy as it heaves back-and-forth. To accurately simulate the conditions of the ocean a test rig system must be capable of producing powerful motion, while controlling total inertia equating to 250 tonnes. This is the equivalent of swinging 8 trucks back and forth, with speeds up to 4 m/s and high acceleration while requiring sub-millimeter precision. Not only does the system need to handle extreme loads and power flow, it must also deliver the highest levels of safety ensuring fault-proof stopping of the rig, should something go wrong – simply a tremendous engineering challenge.

In order to solve the task, CorPower’s team joined up with power and control engineering experts from ABB, resulting in an electric drivetrain with an integrated control system and medium voltage motors, drives and energy storage rated at 7.2MW – equivalent to two large train sets! An industrial 11kV grid connection was secured, and thanks to the energy storage function the power profile of ocean waves could be smoothed to a level permitted in the grid – allowing simulated waves to move through CorPower’s machine hall without the lights of Stockholm flickering.

On the mechanical side CorPower’s team designed a transmission system capable of converting 80.6 kNm torque into linear motion, using the same type of cascade drives used in the WECs. The cascade drive technology, also commercialized by Cascade Drives for industrial applications outside of wave energy, have unique capabilities, combining high force and high speed. The 7.2MW rig power is turned into linear motion by a dual set of cascade drive units, the largest ever built.

Although as the design began taking shape, the team faced another challenge – the industry floor in the machine hall was not strong enough to withstand or support the large forces at play. Therefore, the existing floor was removed and 20 piles were drilled into the bed rock before casting heavy slab foundations to firmly hold the system in place, preventing the building from shaking due to the rig motion.

The world’s largest wave energy dry-test facility has been operational since early summer 2021.