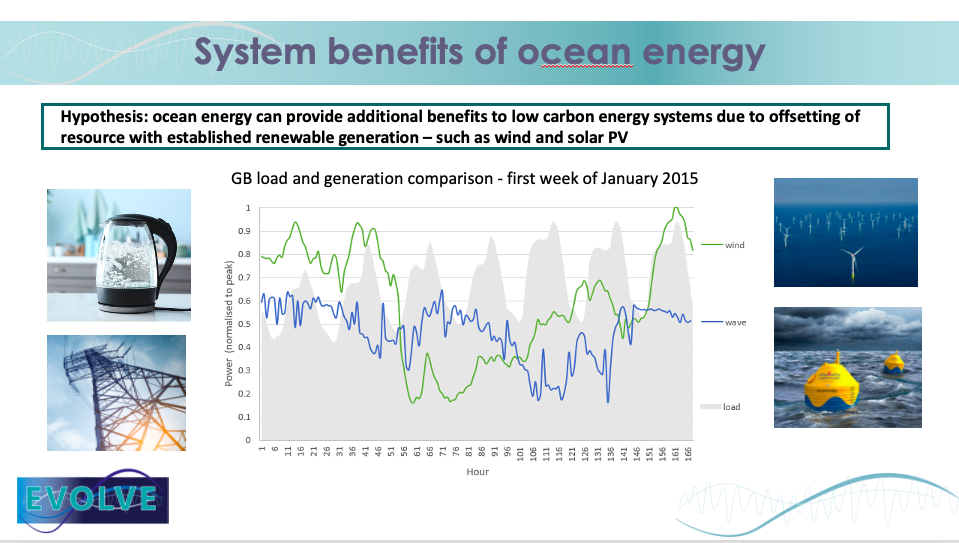 With official results from the EVOLVE Project due for release later this year.

The €1million initiative – which stands for Economic Value of Ocean Energy – aims to build a firm evidence base to support the introduction of – ocean energy in Europe’s future energy system.

“In recent years there’s been lots of talk about the potential benefits of adding wave and tidal to the energy system, but there are limited quantifiable studies demonstrating the benefit of ocean energy,” said Shona, who also serves as a Research Associate in Marine Energy within Edinburgh University’s Policy & Innovation Group. “The EVOLVE project aims to address this by producing quantifiable results in terms of the costs and carbon savings associated with deploying ocean energy into future low-carbon energy mixes.

“Our country-scale modelling covers three regions: Great Britain, Ireland and Portugal – all located on the West Coast of Europe with some of the highest ocean energy resources. Initial results have found a consistent pattern when including wave and tidal deployments in high renewable 2030 future energy scenarios. For each of the three regions, increasing the deployed capacity of commercial-scale ocean energy arrays results in a decrease in system dispatch costs (the cost of delivered fuel, and other variable operation and maintenance) and in annual carbon emissions. This is due to the offsetting in time of wave and tidal resource with more established renewable energy solutions such as wind and solar PV.

“It has been found that this offsetting results in a more consistently available renewable generation profile with higher proportions of ocean energy deployments, enabling lower dispatch requirements for expensive, carbon-intensive fossil fuel generation. Wave energy, in particular, has also been found to correlate better to peak demand than wind, solar or tidal, and could improve overall system security. This is particularly pertinent given the current climate and broad demand to ease reliance on gas imports.”

Following stakeholder workshops the EVOLVE consortium is now refining its analysis associated with future deployment scenarios, fossil fuel generation, and alternative energy vectors such as storage and hydrogen generation. It is expected to release a detailed project report in Autumn 2022.

“We have several different work packages addressing spatial and temporal aspects of ocean energy,” added Shona. “For instance, Aquatera is focusing on identifying where the greatest ocean energy resources lies, across the three regions, while calculating additional constraints on the energy system. Using a bespoke GIS tool, created and developed by Aquatera,   we are able to pinpoint locations for future wave and tidal arrays based on a series of parameters including distance from shore, bathymetry, presence of shipping lanes and aquaculture etc…This spatial analysis is helping identify for example how much wave energy can be deployed across the regions, and where it can be positioned to generate the highest value.

“In addition, temporal analysis is being carried out by the University of Edinburgh and RISE in Sweden, using hourly dispatch models to represent power systems in GB, Ireland and Portugal. We have built models based on established future scenarios across the regions, before conducting sensitivity studies to understand how these scenarios change when adding more wave and tidal into the system. We can then assess how this impacts the hourly marginal price of energy, which represents the wholesale cost of energy – and therefore the total cost of energy to the consumer.

“Furthermore, in Portugal, WavEC Offshore Renewables has been carrying out detailed microgrid modelling looking specifically at island systems, using the Orkney archipelago in Scotland as a case study. This work is looking to understand the role of wave and tidal energy within the optimal combination of renewable energy, to meet demand through 100pc renewables, plus storage.”

While green energy continues to be implemented at pace across Europe, Shona added that the key challenge in the race to 100pc renewables lies in providing a ‘consistent and stable’ supply of power.

“We already have a good amount of wind in the UK renewable energy system and we will see plenty more as we move to net zero,” added Shona. “However, if we are to also introduce ocean energy, our findings indicate it will be highly complementary and offset the time periods when we have lower wind resource.

“By modelling future power system scenarios across Europe, the EVOLVE project aims to quantify how ocean energy can not only supply power to our electricity grids, but also enable a more diverse energy mix and cost-effective matching of energy supply and demand. In this respect, the project will deliver a business case for future ocean energy developments as an integral part of Europe’s future energy system.”